Outlander returns to Starz on September 10 at 8 p.m. ET to continue the time-tripping saga of lovers Jamie Fraser (Sam Heughan) and Claire Randall Fraser (Caitriona Balfe), who, when the season begins, are not just separated by continents but by centuries. The story picks up where it left off, meaning season three will focus on events from Diana Gabaldon’s third novel in the series, Voyager.

Heughan and Balfe gave Parade a sneak peek of what to expect as the new season of Outlander unfolds.

The Battle of Culloden
A badly wounded Jamie has a major confrontation with Dragoon Captain Black Jack Randall (Tobias Menzies). The two opponents will lock eyes on the battlefield and then the sword fight is on! “I love our fight,” Heughan says. “We worked on that scene for a while.”

Claire returns to Frank and gives birth to Brianna
By returning to the 1940s to give birth, Claire gives up everything important to her. She tries very hard, but her marriage is one of convenience. She may admire Frank, her 1940s husband (also played by Tobias Menzies), but she can’t find the passion she has with Jamie.

“There’s a lot of anger, a lot of regret,” Balfe says. “If it hadn’t been for Brianna, Claire would have stayed with Jamie, would have gone to Culloden and would have gladly died on that battlefield next to him.”

When Claire discovers Jamie could still be alive, she leaves her daughter behind—forever!
Claire, Brianna (Sophie Skelton) and Scottish historian Roger (Richard Rankin) search in the 1960s for clues to Jamie’s fate. When they discover he may have survived, she decides to return to the 18th century, knowing doing so means she can never see her daughter again.

“That was a really tough part,” Balfe says. “We talked a lot about how to convey that. Bree finally is the one that tells her to go. Without Bree’s permission, she never could.”

Love may not be as easy the second time around
Twenty years have passed since Claire and Jamie were together before, and a lot has changed. When Jamie sees Claire again after all those years, it’s a complete shock.

“This angel again comes into his life,” Heughan says. But the most interesting things, he adds, are “everything else that happens after.”

The next adventure: Jamaica
A family emergency necessitates Jamie and Claire to set sail to the Caribbean. In order to actually film scenes onboard ship, the cast and crew of Outlander relocated from Scotland to South Africa to use the vessels on the set of TV’s Black Sails.

“It was amazing,” Balfe says. “It was such a completely different environment than what we’re used to.”
– Source 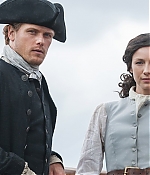 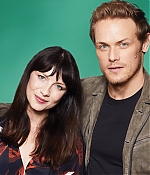