Outlander: Inside Jamie and Claire’s ‘rough’ adventure, plus season 4 intel

Put away those steel drums and forget about the Planter’s Punch: Though Jamie and Claire are about to set sail for Jamaica in Sunday’s episode of Outlander, it will be anything but a Caribbean vacation for the not-so-euphorically happy couple.

“There are no umbrella drinks going on,” teases executive producer Matthew B. Roberts. “It is rough going for both of them.”

In breathless anticipation of the drama’s final five episodes, EW returned to Scotland to chat with Caitriona Balfe (Claire Randall Fraser) and Sam Heughan (Jamie Fraser) about the passionate reunion of their characters in episode 5 and how love doesn’t necessarily conquer all when so much time has passed.

“The hard work in any relationship is getting beyond the fantasy,” Balfe tells EW. “That’s when all the truth comes out and Claire learns everything. You want it all to go smooth sailing. But reality is never like that. It’s not the Disney dream.”

But something magical will happen in the coming episodes. For this week’s cover, EW is offering fans an exclusive first look of the fancy togs Claire and Jamie don to attend a lavish ball in Jamaica. If you think the costumes look familiar, then you would be right; the couple wore them at the Palace of Versailles during season two.

“It’s an Easter egg,” says costume designer Terry Dresbach of Jamie’s smart suit and Claire’s sumptuous saffron gown. It’s also historically accurate to re-purpose the outfits. “In the 18th century, people would have an item of clothing for their entire lifetime,” she adds. “So things got remade, repaired, and reconfigured. We will see that a lot in Outlander coming up.”

For the next issue of Entertainment Weekly, we’ll give some hints about what Claire and Jamie will encounter in the Caribbean while on the hunt for Young Ian (John Bell). We’ll also share some secrets about season 4, like how a green pasture in Scotland will double as a North Carolina plantation owned by Aunt Jocasta, a key character in the new year that will be played by Maria Doyle Kennedy.

And good news, Sassenachs! We’ve created another trio of Outlander covers to go with the last set. The first two below, featuring Heughan and Balfe individually, will be available to subscribers and on newsstands Friday. The third, showing the two actors together, will be available exclusively at Barnes & Noble stores beginning Tuesday, Aug. 29.
– Source 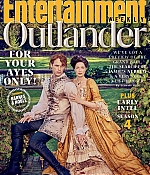 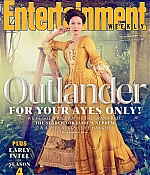