Executive producer Maril Davis talks the perils of recreating the New World: “You’re never going to get the heat and humidity of North Carolina in Scotland.”

Ask someone who hasn’t seen a single episode of Outlander to explain the series, and they may still be able to tell you two details: 1) This is a story that takes place in Scotland, and 2) it’s a romance about two very attractive and charismatic people who are torn apart by the quirks of time travel. But as the beloved book adaptation heads into its fourth season on Starz next month, both of those main components are going out the window.

As the show returns, the attractive couple in question—Caitriona Balfe’s Claire and Sam Heughan’s Jamie—are together at last, and making a new life for themselves not on the Highlands, but in colonial America. Outlander is not done with Scotland for good, but it’s certainly trading in plaid kilts for buckskin trousers this season. In the new series of photos above and an exclusive behind-the-scenes video below, we get a glimpse of what life will be like for Claire and Jamie as they build a home together in North Carolina. The show’s executive producer, Maril Davis, also shed light on some of the challenges the show faced as Outlander reshaped its look while maintaining its identity. We’ll all get to see how they did when the new season premieres on Sunday, November 4.

What was the biggest challenge of bringing Claire and Jamie to America?
The biggest challenge by far was trying to figure out how to film North Carolina in Scotland. In Scotland, everything is stone. We certainly debated moving [production] to North Carolina, because I’ve said all along that one of the amazing things about Outlander is that we were actually able to film where it took place. Usually it’s Los Angeles or Vancouver or Washington. But at the end of the day we realized we love our crew too much to leave Scotland, and we have such a fabulous art department. So I’ve always said the only thing we could not replicate is the weather, because certainly you’re never going to get that heat and humidity of North Carolina in the summer in Scotland. So we just kind of decided from the get-go not to talk about the weather. We just wouldn’t try to play that at all.

Claire and Jamie are trying to fit into this new culture, but feel unease around both slavery and the attitudes that the colonists have toward the Cherokee Nation. How did you make sure that perspective came through?
Jamie has such a unique perspective on this because in many ways, he is very similar to the Native Americans in the colonies. He, too, was displaced by the British coming, as the indigenous people are. What an interesting perspective that was for Jamie coming in, kind of like: “How am I about to do, to someone else, what was done to me?” We’re not a SAG show, so unfortunately we can’t cast actors from the United States. But it was very important that we cast indigenous actors. So we went to Canada and brought over First Nation performers. It was difficult, because we kind of had to block-shoot everything because we were bringing over a hundred people at a time.

Then Matthew Roberts—who is one of the executive producers and writers—he flew up to North Carolina, and he met with one of the Cherokee leaders and had discussions with him about what we were going to do. Unfortunately, there are many story lines in this book that are not necessarily so flattering to Native Americans. We’re sticking to the source, but we also want to be sensitive to the Native Americans [and] show things from their perspective as well, so it doesn’t seem so one-sided.

The couple get offered this great piece of land called Fraser’s Ridge, which I know fans of the book will be excited to see. But as Caitriona Balfe points out in the video, this puts Jamie and Claire once again on the wrong side of history. What’s the tension there? Side note: I wish I had a Claire Fraser in my life to tell me when I was on the wrong side of history.
Yeah, exactly. Or: “These are the lottery ticket numbers you should use.” Certainly Claire knew the outcome of Culloden, and they tried very hard to stop it and couldn’t. Now, in North Carolina, they’re in a similar situation. They know the American Revolution’s coming, and they know by taking the land that they will be on the wrong side of history. But what they have here is this opportunity to have a home and roots, which is so important to Claire, because they’re kind of nomads. All the time they’ve known each other, they’ve never had a real home.

That’s a very important theme of this year: home. Home is wherever you make it. And I think this particular dilemma puts Jamie at odds with people he loves, and that’s the kind of dilemma we writers love.

After three seasons of separation and conflict, Jamie and Claire are finally together. This season will be so much less about any kind of will they/won’t they. How do you keep the romantic spark alive in this new chapter in their lives?
We’ve always said that this is not Sam and Diane from Cheers. This is never going to be will they/won’t they. Let’s show a new stage or kind of relationship in TV, of a loving couple and them staying together. It’s a mature, loving relationship, and that’s so interesting to us, and something we’ve talked about to the actors quite a bit. In some ways, though, it’s starting over for them again after the 20 years apart—relearning each other’s ways. This is such a busy season, with Brianna and Roger being in the forefront a little more and their relationship unfolding. But we’re trying to do these small moments with Jamie and Claire.
– Source / View Video 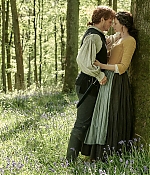 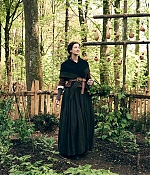 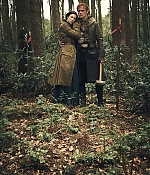 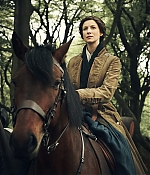