There is nothing better than getting together with family for the holidays!

In honor of Sunday’s much-anticipated meeting between Brianna and Jamie, EW snagged the exclusive first photo of the Fraser family and the first official portrait of Brianna as an 18th century lady. The results are positively rosy!

We also checked in with executive producer Maril Davis about shooting the pivotal scene for “The Birds and the Bees.” Here’s what she had to say about Brianna (Sophie Skelton) meeting Jamie (Sam Heughan) for the first time.

ENTERTAINMENT WEEKLY Did you like you needed to chat with Diana Gabaldon about the reunion?
MARIL DAVIS Everyone calls it a reunion. In fact, I’ve done it myself sometimes. They’ve never met before! We didn’t specifically talk to Diana. The scene is fairly similar to the book. It was important for us to get it right. We’ve been looking forward to that scene, seeing Jamie finally meeting his daughter. We had a lot of discussions with Sam and Sophie about it. I just love that it. There’s so much emotion there and for Jamie to see the daughter he’s heard so much about but never had the chance to meet … I think he’s shocked and overwhelmed and excited and heartbroken. There are so many emotions that show on Sam’s face. He does such an amazing job, as does Sophie.

What were the discussions about music for the scene?
We had a lot of discussions with Bear [McCreary, the music creator] and initially, there was a little more music in the scene. He lays it out and then we weigh in and figure where the music should be set and pull it back if we need less. He struck a perfect tone.

So do Brianna and Jamie settle into a loving relationship?
It would be interesting to hear what Sam and Sophie felt about it but for us, we feel like Jamie has loved Brianna since he found out she existed. I mean, certainly once he sent Claire back with the stones, I don’t think he had hopes that he would survive, and Claire and their child would survive. But I think ever since Claire came back, he realized, ‘Oh, my God, I do have a child and she’s alive and her name is Brianna,’ so he has loved. I think it just deepens his love when he sees her in person. He’s had her in his mind already but I think he falls in love with her all over again. But while there is love there, it’s going to take a little while to get to a place where they’re both comfortable. Remember, they know about each other but they’ve never seen each other before. She loves Jamie but she’s still torn and feels loyalty toward Frank. It will be a really interesting journey for both of them.

A quick programming note: there will be no Outlander Live! on New Years Eve. We’ll be back Jan. 7 on EW Radio, Sirius XM 105. 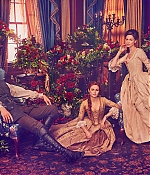