Caitriona Balfe on Her Most Polarizing Red Carpet Looks: “It Doesn’t Have to Be for Everyone Else”
The Outlander actress is all about out-there fashion. If she loves it, she wears it — as it should be.

Let it be known that Caitriona Balfe doesn’t take a red carpet lightly. Case in point: the 2019 Golden Globes, where, among a sea of standard fishtail gowns, Balfe — a four-time nominee for best actress in a TV drama for her role as Claire Fraser in Outlander — turned up in a strapless custom Moschino dress that featured a voluminous burgundy velvet tulip skirt. A less confident woman wouldn’t necessarily opt for a silhouette that balloons at the hips, but Balfe, 40, isn’t afraid of Fashion (with a capital F). “That was probably the most polarizing thing I’ve worn,” she says with a laugh. “But it was different, and I loved it. I always say if I love it, then I’m happy. It doesn’t have to be for everyone else. Some of what I wear is crazy, but it’s good crazy. And if my mom hates it, then I’ve probably done the right thing!”

It wasn’t always this way. High fashion didn’t really enter Balfe’s consciousness until 1999, when she was approached to become a model while studying drama in her hometown of Dublin. She spent the next 10 years hitting the catwalk for such houses as Chanel, Dolce & Gabbana, and Marc Jacobs before moving to Los Angeles to pursue an acting career. Going from runway darling to Hollywood ingénue was an adjustment fashionwise. “When you first start, the availability of what you get offered [to wear for big events] is different — you’re just grateful that somebody’s lending you a dress,” she says. “I was fortunate to have had prior relationships with many designers and to get the opportunity to work with them again in a different way.”

Now, with Outlander going into its fifth season on Starz and a major role in the upcoming blockbuster Ford v. Ferrari, out in November (she plays Mollie Miles, the wife of legendary 1960s race-car driver Ken Miles, portrayed by Christian Bale), Balfe has even more opportunities to show off her fashion prowess, although comfort is essential. “I’m never going to do a 20-foot train because I need to be able to get from point A to B and go to the bathroom by myself,” says the actress, who works with stylist Karla Welch to prepare for the red carpet. “Plus, there’s no point in walking out the door in something that doesn’t make you feel great. If you don’t wear something with confidence, it doesn’t matter how it looks.”

Indulging Balfe’s madcap fashion whims was part of the joy of this shoot. Her favorite looks? The Miu Miu shorts-and-jacket combo (“I could wear that every day”), the Ferragamo jumpsuit (“I was like, ‘I can steal this, right?’”), and the very scrunchy pink shawl by Moschino Couture. “I love when you can really play with clothes and enjoy them,” she says.

Balfe’s zesty outlook extends beyond her wardrobe. “I couldn’t be happier with where I’m at, the people in my life, and the things going on in my career,” she says. “It’s been a hectic but good year. I hope it isn’t my best one, though. Because that would really be shit!”

For more stories like this, pick up the November issue of InStyle, available on newsstands, on Amazon, and for digital download Oct. 18.
– Source 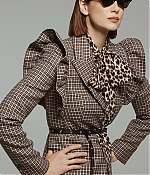 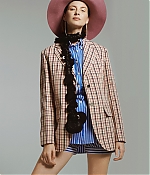 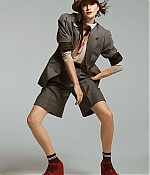 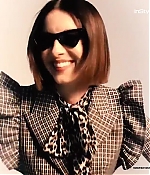