I will admit, it was my Mom who first told me to watch Starz’s series Outlander (anyone who’s a fan knows being tipped off to this show by your Mom, or watching it with your Mom might be a tad awkward) but, upon watching it by myself, I immediately fell into the romantic escapism of it that has so many wonderful elements. You really do kind of fall into this show, you want to step into the screen. There’s time travel, spirituality, history, romance: It’s all there. But really from the get go, one of my favorites part of Outlander was its lead – the wonderful Caitriona Balfe – who I always felt brings serious acting chops and authenticity to the series.

Sitting across from Balfe at the Tata Suite at the Pierre Hotel, I realized one thing pretty quickly: She might just be one of the chillest humans I’ve interviewed. Yes, “chill” is truly the word for it. And when I asked her if she’s a romantic Balfe didn’t think twice: “I don’t think I’m a romantic I think actually I am pretty cynical. I think this show definitely made me more romantic…but yeah, Valentines Day is not my thing. I know. My poor husband.”

A cynic talking to a cynic: These are my favorite kinds of interviews.

I suggested that maybe she’s an old soul, rather than a romantic (as I know Balfe is a voracious reader) and to that Balfe characterized herself as somewhat of a blend: “I’m very young at heart, but combined with a bit of an old soul. I have two sides of myself, one side is this crazy-likes-to-party side, and then the other side is likes-to-hibernate-and-keep-quiet-and-read. Those two sides constantly battle and that’s why I’m crazy!”

OK this was getting witchy. And it was the last line of her answer I especially loved. I’ve always been convinced all the best people are crazy.

To rewind some odd years, Balfe first got her start in modeling, an opportunity that arose while she was at drama school in Dublin, “I got scouted, and it was like ‘OK I can stay in Dublin in this shitty theater program or move to Paris.’ So I said ‘I’m moving to Paris.’ So then I was living in New York and it was coming up to almost a decade doing modeling, and I was miserable. I was in a bad relationship and I wasn’t doing what I wanted in life…So I broke up with the bad relationship and moved to LA and started taking acting classes.”

Something I think was key to Balfe’s success is she never really considered things wouldn’t go her way: “I was very naive and I lived in a little bubble of delusion that it was going to work out. I think that was the best thing. I didn’t know how I was going to get a job but I was just like…‘It’ll happen.’”

When I expressed how rare and refreshing that was to hear about an actresses’ start, Balfe chimed in pretty quickly, “I mean I’d come out of fashion so I was deeply insecure and my self confidence was in the toilet. I think that’s what happens after spending ten years in the fashion industry.”

(I agreed with that last sentiment whole-heartedly.)

“But I loved that I had those years to study and get my feet back underneath me properly.” Balfe said.

One thing I’ve read about Outlander, is there’s real effort to staff female writers as well as female directors. It when we got on the topic of what work’s still to be done for gender equality that there was obviously a lot to say. And I loved everything Balfe said about it so I’l need to do the full quote:

“Oh god, there’s so much to be done. It’s crazy that it feels like it’s revolutionary or that we are ‘championing’ by trying to have parity when the world is split 50/50 female, male…Why is there such a skew?” Balfe quipped.

That is the perennial question.

Balfe went on, “It’s one thing talking about writers and directors, but it’s also really the crew. When you look at why the crew is so male skewed you also look at the hours that people work. At entry level you get a lot of young women, but if you want to have a family you can’t work those hours. So we have an entire camera crew who are all male. All their partners have had kids in the six and a half years that we’ve been doing this show. And they get to go to work and they get to have their career and they get to advance and move up the ladder. But if there were any women in that position they would have to take time off, they would have to be moved out of the ladder of ascension in their career because they have to make that choice of ‘Do you want to have kids or do you want to have a career?’ And that I think is something we really need to keep discussing. Because it then affects who becomes Directors of Photography, who becomes first ADs, who becomes producers. And it’s all of these positions of power that I think affect how the atmosphere is on a crew. Or the type of material that gets greenlit.”

I sat nodding whole-heartily in agreement and at some point Balfe looked at me and said, “Sorry I can go on about this for a very long time.”

I asked her to please…go on.

“That’s why you’re still finding that we can have a female director come on to our show, but if she is trying to manage a crew that is 99% male skewed, how much influence can she really have? Because she might say something and then gets completely overruled by the technical side of things with the camera crew and the DP. I see it all the time. There’s so much work to still be done.”

When I followed up about the culture of Outlander, inquiring if it’s a good one she was quick to say this: “Oh my god yes, and I think that we really try very hard to have that kind of balance, but it’s still a very male skewed crew. And I think you find that everywhere. And it’s tough to change the culture.”

I particularly enjoyed talking with Balfe about her most recent film – Ford v Ferrari – and what that set was like:

“It was amazing to see Christian and Matt.- how they worked with no ego. I think it’s just such a great lesson to see that people who get to the pinnacle of their careers – like them – their main focus is still the work. And it was very much like whatever Jim (the director) needed, whatever was needed to make the scene, that they were just there for the work. And that’s a beautiful thing. And I think both of them are the kind of actors that I admire and aspire to be. And Tracy Letts as well, these really amazing, talented creative people — they don’t care about the bullshit. It’s all about the work. And I think that’s a really lovely reminder.”

By “bullshit,” Balfe meant the skewed priorities of certain actors, “I think you can see with other actors: It just becomes about being a brand.”

(Cut to our mockumentary about social media celebrities.)

Looking into who so many of Balfe’s fans are, I especially wanted to ask her what her advice would be for young women growing into themselves and trying to find their voice, to which she said:

“I think you have to speak up. The difference between growing up as a young woman and growing up as a young man is that somehow…men don’t seem to have that fear of ‘oh god, what if I say something — how will that be perceived?’ They just kind of go and do it. And I think that’s something that we need to do more of as women. Own that space. Take up that seat. Put your voice forward. Don’t worry about how it looks or how it sounds, just take up the space. And it’s unfortunate that that space isn’t just given to you, but at the same time if you don’t take it then somebody else will and they probably will have a penis.”

On that last note we all cracked up. And then I promised to end the interview with that, and I will keep my promise. To the possible chagrin of Balfe’s PR team…

Brunch is probably my favorite meal ever. So it has to start with eggs…as long as there’s black Americano and eggs I’m good. Then I would go have ramen somewhere. Momofuku, why not? Let’s go there. And then I’d go for sushi. And then I’d get drunk and I would have a burger. 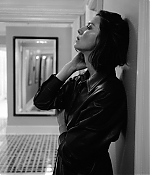 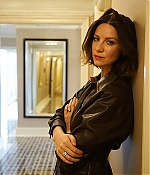 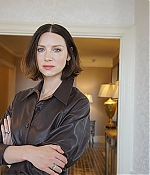 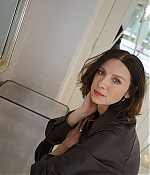