Before you ever knew her face, you might’ve seen Caitriona Balfe’s feet.

The “Outlander” star got one of her first movie roles as an extra in 2006’s “The Devil Wears Prada,” dashing through New York in designer heels in the beloved Meryl Streep dramedy.

“It’s the opening scene where everybody’s walking in front of the (Runway magazine) building, which is when I think my feet might be in it,” Balfe recalls with a laugh. “I saw Meryl, but we weren’t hanging (on set). I don’t think we were allowed to get too close.”

Fifteen years later, Balfe joins the acting legend in the 2022 Oscar race, as both are contenders for best supporting actress: Streep for Netflix’s upcoming climate change satire “Don’t Look Up” (in theaters Dec. 10 and streaming Christmas Eve), and Balfe for coming-of-age tale “Belfast” (in theaters Friday), written and directed by Kenneth Branagh. 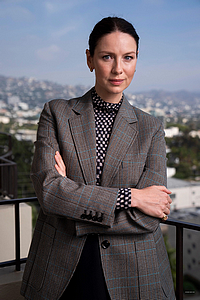 Awards pundits at Indiewire and Next Best Picture are calling Balfe a front-runner in the category, while “Belfast” is well-primed for a best picture nomination.

“The response to the film has been overwhelming,” says Branagh, praising Balfe for the compassion and intelligence she brought to her performance. “She has access to a certain kind of ferocity that my mother had. It’s an electrifying anger that makes you feel she could change the world.”

“Belfast” is inspired by Branagh’s childhood in 1960s Northern Ireland during the Troubles, a political and nationalistic clash between Catholics and Protestants that lasted three decades. Balfe plays the warm and unwavering Ma, who desperately wants her family to be able to stay in their benevolent Belfast neighborhood despite escalating violence.

Ma’s staunch desire to remain in Belfast leads to a tearful confrontation on a city bus with herhusband (Jamie Dornan), who suggests they leave Ireland to help protect their sons Buddy (Jude Hill) and Will (Lewis McAskie). It’s the sort of scene that’s catnip to Oscar voters.

“I understood her fear and pain: How do you leave everything and step into the unknown?” says Balfe, who was born in Dublin. “Even though this is very much Ken’s personal story, I recognized Ma immediately. There’s so much of my mother in her, and so much of the Irish women I know. They’re quick to anger, quick to love and quick to have fun.”

“Caitriona manages to peel layers of human artifice back,” Branagh says. Her ability to empathize “so fully with the heartache of leaving really touched me.”

Balfe has her own personal connection to the Troubles: As a young girl, she moved to a small village just south of the Northern Ireland border, after her police sergeant dad was transferred there amid the ongoing conflict. She recalls shopping trips and dentist visits where they’d pass through British Army checkpoints, with soldiers pointing machine guns at the family car.

“That was quite normal in my mind as a kid, because that was just what we saw,” Balfe says. But she was particularly shaken by one bombing not far from her home when she was 7 years old: “That was the first time I was able to comprehend what was really happening. I remember seeing it on TV and being really scared.” The bomb scares continued when she was a teenager, but growing up near the border, “it was just a continual backdrop to your life.” 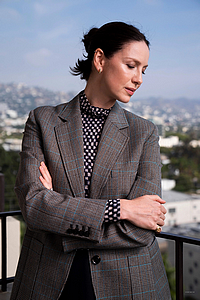 “Belfast” is a film about tolerance and resilience, as well as a love letter to the movies that shaped Branagh (hence the black and white). Balfe fell in love with movies watching “National Velvet” and “All Dogs Go to Heaven,” and got her acting start in youth theater. She eventually enrolled in drama school, but took a “detour” when she was scouted by a modeling agent at 18, appearing in runway shows for Marc Jacobs, Giorgio Armani and Victoria’s Secret.

After a decade, “I was slightly miserable doing what I was doing,” says Balfe, who wished to give performing another go. “It was one of those decisions like, ‘Now or never, Balfe.'”

Balfe made her feature acting debut in J.J. Abrams’ 2011 sci-fi adventure “Super 8.” But it was her leading role in the Starz romance “Outlander,” as the time-hopping Claire, that won her legions of fans. She remembers getting the call that she was cast in 2013, while staying with a friend who had just put her kids to bed.

“It was the quietest I’ve ever been accepting a job. I was like, ‘I can’t wake the twins!” Balfe says. As she gears up for the show’s sixth season, which airs on Starz next year, Balfe credits “Outlander” for the “invaluable” training and “confidence” it’s given her: “After a long-running TV series, you can tackle anything.”

In August, Balfe announced that she gave birth to her first child with music producer Tony McGill, her husband of two years. Although she hasn’t gotten much sleep these last couple of months while promoting the film, “having a baby is the most amazing thing,” Balfe says. “It’s been a juggle, but it’s nice to have my old life back and also have this beautiful little boy.”

Balfe spent a lot of time with her child co-stars and their moms shooting “Belfast,” and “in some way, that encouraged me to go for it and have my kid,” she says. “If I could have the same relationship with my son that they have with their mothers, I think he’d be really happy.”

As a new mom, she also feels an even greater connection to her character than when she made the film.

After giving birth, “Ken (Branagh) called me and was like, ‘Does this mean we have to do reshoots now?'” Balfe says. “I was like, ‘Maybe we should do a prequel, just me and Dornan for an hour and a half trying to get a baby back to sleep.’ I don’t know if that’d go down as well, though.”