﻿ From ‘Outlander’ to ‘Belfast,’ Caitríona has learned you must ‘create your own destiny’ « Caitriona Balfe Fan
Home Caitriona Career Press Photogallery Videos Online

From ‘Outlander’ to ‘Belfast,’ Caitríona has learned you must ‘create your own destiny’

Caitríona Balfe has been waiting her entire career to be offered a project in Ireland. After filming Kenneth Branagh’s semi-autobiographical drama “Belfast,” about a young boy growing up in Northern Ireland during the Troubles, the 42-year-old actress is still waiting.
“Technically, I still have not worked in Ireland as an actor,” Balfe laughs as she reflects on the film, which shot in Surrey, England, last fall. “It’s really strange. But it’s something I’m always looking for. It was so lovely. Even though that accent is not my own accent, it’s very close. It’s one I’ve grown up listening to. Being part of something like this touches you in a different place. It pulls something a little bit different from you when you’re doing something that is so personal or has that personal tie.”

Balfe grew up about 90 minutes from Belfast, on the other side of the Ireland border, in Monaghan. The actress describes her hometown as a “small, one-horse town” (it didn’t even have a movie theater) and she remembers going back and forth between Ireland and Northern Ireland throughout her childhood.

Her father worked as a police sergeant and her mother was responsible for raising Balfe and her four siblings — an experience that feels related to the circumstances depicted in “Belfast,” which is now playing in theaters nationwide. In the film, Balfe plays Ma, a hardworking woman raising two boys in 1969 Belfast while her husband, Pa (played by Jamie Dornan), commutes to England to earn a living.

I thought about my mom a lot while filming this. Just how tough it must have been for them.

“The circumstances are very different, but the timing is similar,” Balfe recalls. “Only a little more than a decade after this time we moved to the border because of my dad’s job because things had escalated in that 10 years to the point where it was really like a war zone. But [my mom] left her really tightknit community of sisters — they all lived very close to each other down near Kildare. All of that definitely resonated with me in a different way. I thought about my mom a lot while filming this. Just how tough it must have been for them.” 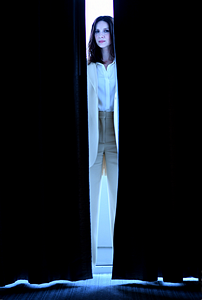 While Branagh wrote “Belfast” based loosely on his own upbringing, the director wanted his cast, which also includes Judi Dench and Ciarán Hinds, to draw on their own memories. One of the first days on set, Branagh sat Balfe, Dornan, Dench and Hinds around a massive table — for social distancing — and invited them to speak about their experiences growing up and their recollections of their parents.

“In his master genius way, I think he was pulling out things he wanted us to start thinking about that he wanted to be bled into our performances — without saying, ‘This is what I want you to do,’” Balfe says. “He was like the wizard from Oz, pulling on the levers without any of us quite realizing. Because we were sharing quite personal stories and everyone at times was being very vulnerable, immediately there was a bond between all of us. Especially for me sitting in that room — when I first went in I can’t even tell you how intimidated I was. It helped me so much in terms of how I related to everybody.”

Although Balfe may have initially felt intimidated, there was no doubt in Branagh’s mind that she was the perfect person to embody Ma, a complicated woman who struggles with the idea of leaving her familiar neighborhood.

“Caitríona has the rare combination of passion, intelligence, humor and generosity that makes up what you might call soul,” Branagh says of the actress. “Hers is a large one, which in her work, she is willing to share. … When shooting she was always prepared, and also, was always game to be surprised. We had the same goals for the performance: Truth. Simplicity. Heart. Easy to say, hard to provide throughout, but she did.”

“Belfast” went into production last October with serious safety protocols in place, and the opportunity to get back to work couldn’t have come at a better time for Balfe. She had spent the past four months holed up in her Glasgow apartment with her new husband, Tony McGill, and she was so excited to shoot the film that she missed the pair’s first wedding anniversary.

“I was in that apartment until the beginning of July,” she sighs. “It was quite a strict lockdown that we had in Scotland, which was great because they really managed to get a hold on the numbers. Ken talks about how he wrote that script during that time. I was not that productive at all. It was a really introspective time for everybody. I think we all looked at our lives and thought, ‘What the hell are we doing?’ I might have had a little existential crisis or two.”

Balfe is no stranger to looking inward when the calling comes. Although she grew up wanting to be an actress (she notes, “I wanted to be an actor since I was 3 or 4 years old — I was that annoying little child”), Balfe took a major detour in her 20s. She began modeling at age 18, walking in runway shows for fashion houses like Chanel, Louis Vuitton and Givenchy. She left her one-horse town in Ireland and moved to New York City. But after several years Balfe had to acknowledge that this wasn’t the career she wanted.

“I had always planned on coming back [to acting], but it’s one of those things where it’s hard to see where your path is,” she remembers. “I was definitely really unhappy. I got to that point where I was 27, 28 and I was miserable and I didn’t know how to get to do what I wanted to do. I started taking these random walk-in acting classes in New York to see if I still liked it and to see if I was any good. And I loved it. It took a while to make the decision and when I was like 29 I was like, ‘That’s it, I’m moving to L.A. Something will happen.’”

In Los Angeles, Balfe landed her first job: J.J. Abrams’ 2011 film “Super 8” playing the “dead mom.” She didn’t have any lines, but the experience was enough to convince her to keep going. She got a few more bit parts before she was cast as Claire Randall on “Outlander,” the role that changed everything. 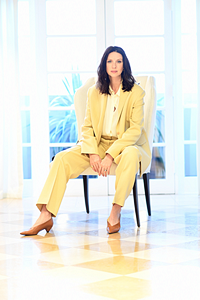 “That role is such a gift, because within that fantasy world the range of what I’ve been able to do with Claire has been incredible,” says Balfe, who relocated to Glasgow for the Starz series, which will air its sixth season next year. “If this was more of a modern-day procedural or something like that I wouldn’t get to do half the things I’ve been able to do. I wouldn’t have been stretched the way I’ve been stretched with that role.”

The upcoming season of the show was a particular challenge for Balfe, who was pregnant with her first child during production earlier this year. The pregnancy was hidden for the episodes — Claire is now in her late 50s and menopausal — and instead Balfe’s focus was on exploring Claire’s trauma from the events that concluded Season 5. The character has endured a lot over the years and often bounced back, but this time Claire has to grapple with her trauma, something that excited Balfe.

“This season it was really amazing because for the first time I got to explore Claire in a way where she’s more destabilized than she ever has been before,” the actress explains. “That’s a lot to do with the events of last season, but I [also] talked to a lot of women and there’s a lot going on in the U.K. press in the last year about women who go through menopause and how that can really destabilize you [and] change your ability to cope with things. I was definitely bleeding that into what was going on in this season.”

She adds, “Psychologically, she’s really struggling from having the attack at the end of last season. She’s someone who’s always been able to compartmentalize things and been able to put things in a box and move on. But this is something she’s unable to do that with. She’s really struggling emotionally and mentally to keep her feet on the ground and keep moving forward.”

Although there are some similarities between Claire and Ma, Balfe was especially interested in exploring their differences. Claire is always ready to leap into the unknown, but Ma fears the world outside Belfast, even as she knows it might be best to move her family from the growing violence. Balfe watched a lot of footage and interviews with women from the time and sought to understand the challenge and complexity of raising a family during turmoil. While the story has its moments of darkness, there is a sense of levity throughout the film — which the actors also embraced behind the scenes.

“There was just a kind of buoyancy to the mood on set because we were all happy to be doing this great project together and Caitríona was central to that,” recounts Dornan, who had only briefly met Balfe before production on “Belfast.” “I found it very easy to pretend we had a real marriage and a real bond and that we were really parenting these two boys together. She made it very easy. … I think we approach work in very similar ways. We’re both super focused and ready but ready to have fun as well.”

Now Balfe is considering where she wants to take her career next. The seventh season of “Outlander” will film next year, and Balfe recently optioned the novel “Here Is the Beehive” by Sara Crossan and is developing the potential film as a producer. She also is ready to start directing.

“This is another gift ‘Outlander’ has given me,” Balfe says. “As a woman in this industry it’s important you create your own destiny, in a way. If you’re waiting on the phone to ring there are going to be huge lulls and dips. I think you have to look at different ways of how you’re going to sustain a career and have longevity.”

“She can and will direct, because she has plenty of things she wants to say, she has an eye for how to say them, and she is determined,” Branagh confirms. “I’m excited to see her develop that part of her work. She is an original and passionate voice, and six seasons of ‘Outlander’ is a hell of a training ground for the technical side of filming.”

After working with Branagh on “Belfast,” Balfe knows one thing for certain: She can’t settle when it comes to her future roles.

“Obviously, when you’re starting out in your career you don’t get those options,” she says. “You take what’s offered. You can have a little bit of power in saying no to some things, but really you’re lucky anyone’s offering you a job. I definitely want to do more work in Ireland. I think that’s really scratched an itch, for sure. When you get given great writing and a great role in a great project, it’s really, really intoxicating, so the next thing you want is great writing in a great role in a great project.”