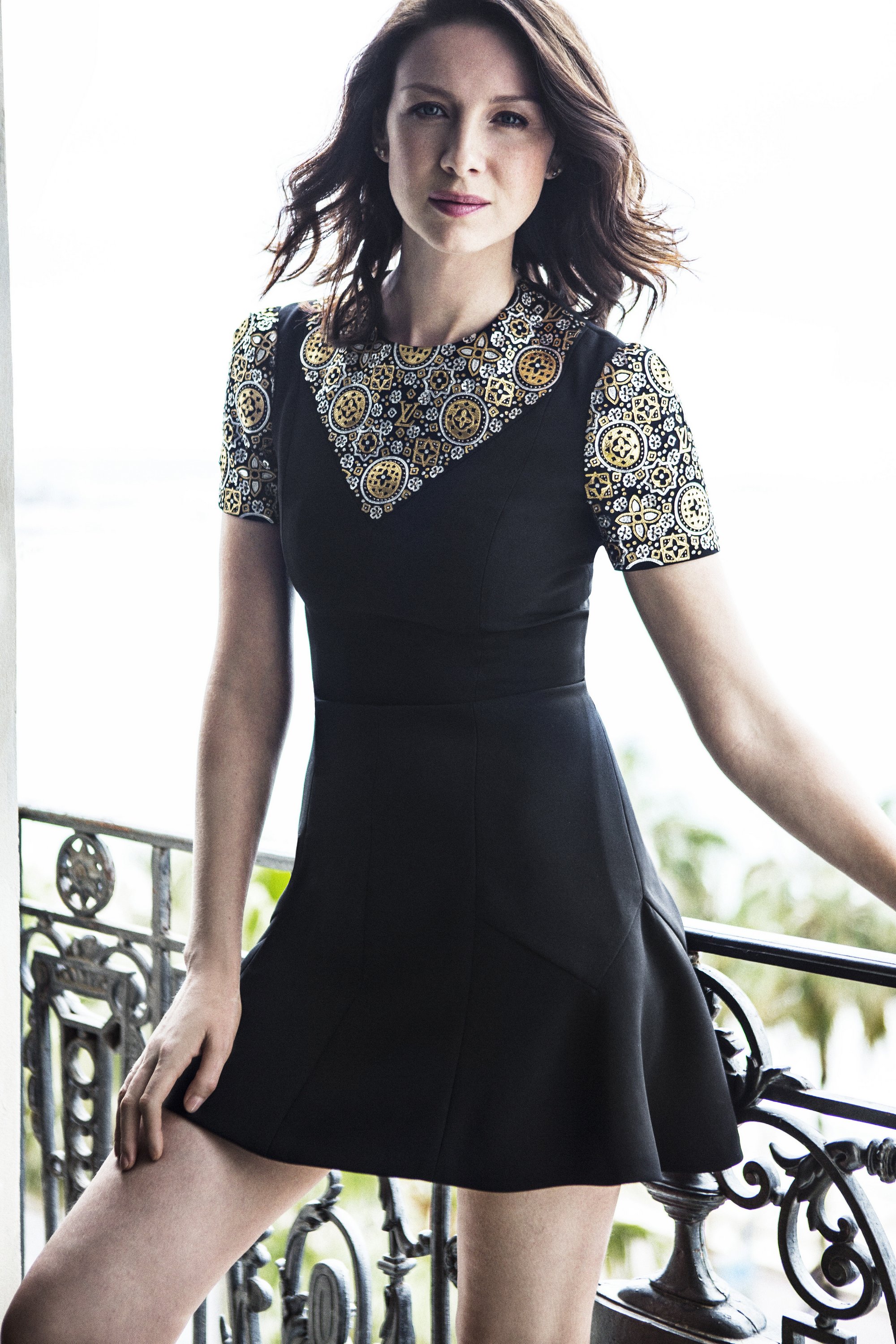 Premiering tonight at the Grand Palais in Cannes, Money Monster follows Lee Gates, a wealthy financial talk show host (George Clooney), who is held hostage on his live TV show by a man (Jack O’Connell) who lost his entire life’s savings after falling victim to a corporate financial scheme that Clooney promoted on his show. 36 year-old Caitriona Balfe plays Diane, the financial company’s communications director who has a moral awakening halfway through the film, when she realizes the extent of her boss’s deceit and her role as a cog in the American money wheel. Here, the leggy starlet talks about being dressed by Louis Vuitton, and what it’s like to work with the stars in the Jodie Foster-directed film.

What was your “I made it!” moment?
Last year when the show [Outlander] came out and one of those buses drove by, it was such a Carrie [Bradshaw] moment. I was like, “holy shit I’m on the side of a bus.”

Before your acting career took off, you were a successful model in your own right, walking at international fashion weeks…
Yes, I walked for Chanel, Michael Kors, Dior, Balenciaga, everyone. But my girlfriends and I would always laugh because we were the blue collar models. We did a lot of shows and we did well, but I was never known, which helped when I made the switch to acting because I think being a model comes with such a stigma.

What prompted the transition from modeling to acting?
My modeling career was trickling down…I hit that point where I was like “ok, I’m not happy, this was never my passion.” I was taking acting classes in New York, and I wanted to make sure I had the passion and talent for it. So I moved to L.A. to try it seriously. I had read an article where Amy Adams talked about her acting coach. So I enrolled in that teacher’s class and started from scratch. I was 29 about to turn 30. People say I shouldn’t talk about my age, but if you focus on the work, it shouldn’t matter what age you are.

And how did you get cast in Outlander?
I was living in L.A., working on bits and pieces of films. My manager sent me to the audition. I didn’t hear anything for three weeks, then I got a call that they wanted to see me again. It was a whirlwind. They casted me on Tuesday, and asked me to be there on Wednesday. I had a cat, an apartment, I had to figure out all this shit. Five days later I was on location in Glasgow shooting. I don’t think any of us expected the show to get the response that it did. Then during my hiatus between seasons one and two I shot Money Monster.

What was it like working with Jodie Foster?
She is so intelligent, but not intimidatingly so. She was a very inspiring person. Her technical abilities with film is amazing. She has such an understanding of it all. She asked me if I wanted to learn about lenses, but I was lost after five minutes. She has an encyclopedic knowledge of film and directing.

What was the best piece of advice she gave you?
To keep it simple. We talked a lot before we started filming. We had a three-hour coffee at Morandi in the West Village before filming started. That was where I got most advice and direction.
What was it like working with George Clooney and Julia Roberts for your first big feature film?
It’s a very technical film. George and Julia were only in the same room twice together when filming. I spent a lot of time in a studio with a green screen, and the first day I had George and Jack O’Connell speaking to me through ear pieces so I had something to react to. It was a lot of that.

What was it like seeing Julia for first time?
I couldn’t stop staring at her during our first read-through. The first day on set she came up to me and was like, “it’s so lovely to have you on board.” Yeah, just a two-time Oscar winner saying this to you. No big deal.

The film deals with financial deception and corruption at the highest corporate levels, a very relevant topic even eight years after the Great Recession. What insights do you think the film brings to this issue?
What I love about the film is that it’s so current. It’s about how working class people are being pushed to their limits, and the general effects of finance on society. It was a subject matter I found really interesting. It felt like a film from the ’70s. It’s a comment on how we’re running big finance companies even today. Yes it’s eight years after the crash, but I think that time is necessary as people need perspective and distance from things before they can be addressed.

You play Diane, communications director of the financial company, but you have a change of heart in the middle of the film. Did you find any resemblances between you and character?
When we first meet Diane she’s quite naïve. She believes in the party line, and she’s having an affair with her married boss. She bought into the idea of him as this successful powerful man who’s doing good in the industry when he’s not. So there’s this awakening of conscious halfway through the film when she realizes that her job has a consequence, and she becomes a truth seeker and works with the show’s producer Patty (Julia Roberts) to get to the bottom of her boss’s scheme. Originally I auditioned with an American accent, but when I got the role she really wanted me to incorporate my Irishness in it. She wanted to show the globalization of the industry, and how it’s effecting everyone. I thought of the image of the Irish coming through Ellis Island. I understand what it’s like to come to New York and be swept up in it all. So we decided that final character would be an Irish woman who had been living in America for a while.

What did you find most challenging about the role of Diane?
I never worked in an office, which I think what was the most foreign thing to me. For other roles you can say “I’ve done something similar,” but this one I couldn’t. My sister works in finance so I asked her what it was like to work in an office all day.

Is this your first Cannes Film Festival?
Years ago, I was doing a shoot for Italian Vogue and they let us borrow dresses and we went to an Arquette party where Rosanna and Patricia were deejaying. We thought it was the coolest thing ever. It’s nice coming back when you’re supposed to be here.

What are you most excited for here?
To come here with a film with Jodie, George, and Julia is incredible. I’ll be the one photobombing them on the carpet.

Louis Vuitton Creative Director Nicolas Ghesquière is dressing you for the entire festival. How did that relationship start?
I used to model for Nicolas, and he would cast me in shows when he was at Balenciaga. It’s nice working with people I used to work with.

What are you wearing tonight?
A black leather bodice, with black chiffon sleeves and skirt. It’s simple but it’s also very cool.