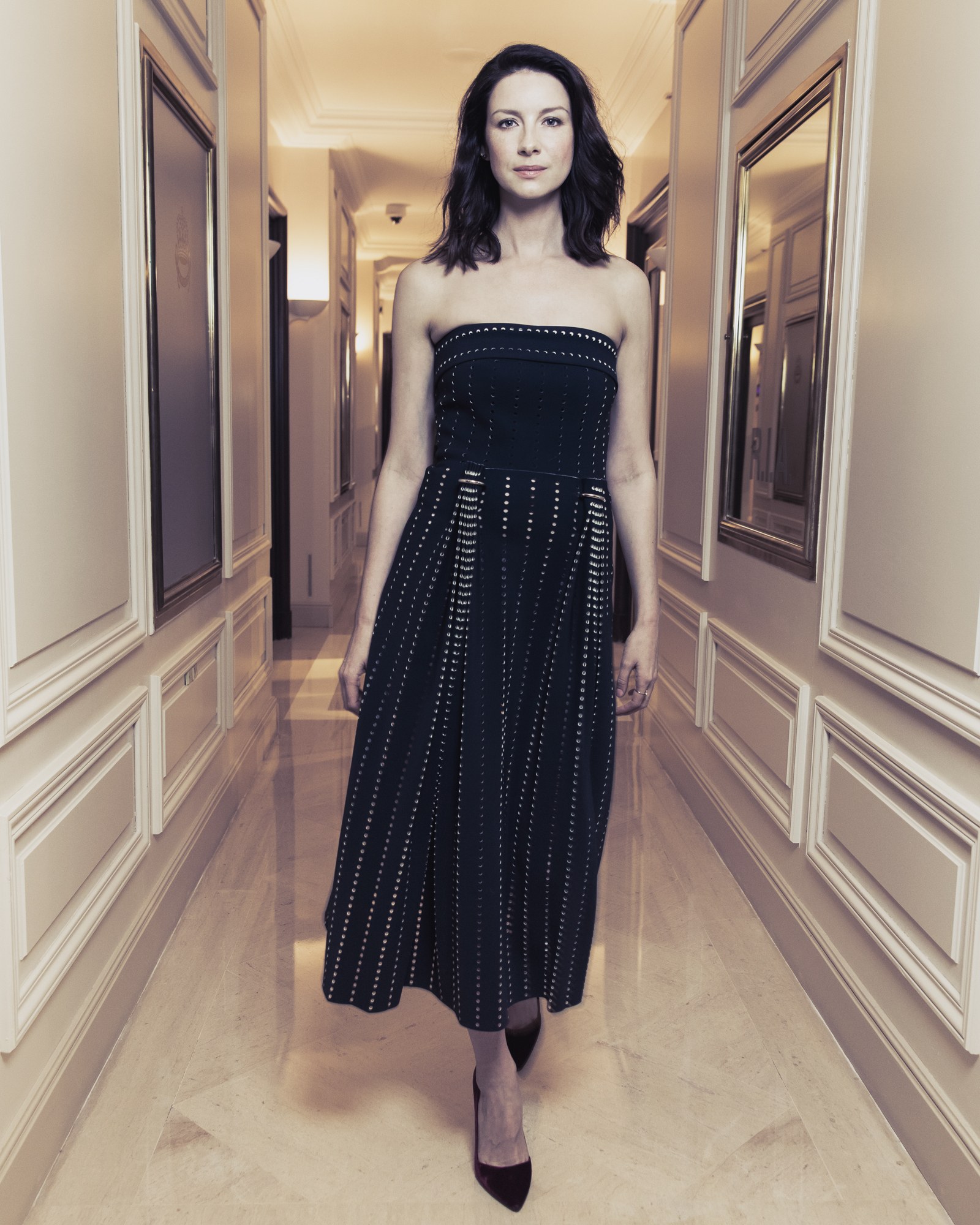 VANITY FAIR – You’re going to get the brunette roles,” an acting teacher once told Caitriona Balfe, back when the 36-year-old was making a transition from a modeling career to acting. She wasn’t sure what it meant at the time, but her career may explain it; after breaking out as the strong-willed Claire Fraser on Starz’s hit Outlander, Balfe appears in her first major film role in this week’s Money Monster, playing yet another woman challenging the world around her—who, yes, is a brunette.

Playing Diane Lester, the spokeswoman for the financial firm experiencing a shady-seeming meltdown, Balfe makes a major transition from Outlander in Money Monster. Away from Claire’s voluminous dresses and wild curls, even using her natural Irish accent, she cuts a thoroughly modern figure—“I think my body is just like, can we take a break with the corsets, please?” she says with a laugh. She spends much of the film apart from the main cast (George Clooney, Julia Roberts, Jack O’Connell), being interviewed for the titular TV show hosted by Clooney’s character, Lee Gates. But when her company begins its meltdown, it’s up to Diane not just to investigate what happened, but explain to the audience the incredibly complex—and very real—financial arrangements that really do make up the global economy that runs our lives.

Lucky for all of us, Balfe was already prepared. “Right before I got the audition, I remember reading this article in Rolling Stone about this woman, Alayne Fleischmann, who was a whistleblower for Chase,” she explained. Also a fan of Vanity Fair contributor Michael Lewis’s books about the finance world, like Flash Boys, Balfe says she has “a fascination for the world of economics” but admits, “My knowledge level is far outweighed by my fascination.” She describes economics as the “backdrop” of Money Monster, but praises the way director Jodie Foster brings out the personal stakes; “You see the consequences of how things like this effect everyone’s lives, and I just thought that was really beautiful.”

Balfe says she has been offered a range of strong female roles in the wake of Outlander, having become famous as a woman bringing 20th-century knowledge to 18th-century Scottish tribes, but she was far from the only self-possessed woman on the Money Monster set. When Foster signed on to direct, she made the effort to make the female characters “deeper than they are on the page,” and both Balfe’s character and Roberts’s emerge as the iron-willed forces in the film, even if they start as subordinates to the men they work with. “It’s not like, oh, here is our powerful female character and we’re going to let her do the powerful woman thing,” Balfe says, referring to other films that might let a single woman have all the good lines and leave it there. “You have two incredibly intelligent businesswomen who are good at what they do.”

With Clooney and Roberts working together on the TV show set, and Balfe speaking to them “remotely” from an office building (actually a soundstage next door), the two stars often took the opportunity to gently tease their distant co-star. “They could see me and hear me, but I could only hear them, and so they were teasing me quite a bit,” Balfe says. “It’s weird when you can’t see somebody and you’re trying to have a conversation. They were like, ‘What are you doing? What are you reading there?’ ”

And they’re not the only co-stars who indulge in a little teasing, either. Balfe filmed Money Monster during the hiatus between season 1 and season 2 of Outlander, and while she was shooting with Dominic West on an icy tarmac in New Jersey, her Outlander on-screen husband Sam Heughan was enjoying a much warmer hiatus. “Sam was in L.A. filming something and sending pictures of him hanging out in beaches and stuff,” Balfe remembers. “I had just come from freezing my ass off on Outlander for a year, and I was literally using my heels as ice picks just to stay upright. It was cruel.”