The cast of ‘Outlander’ brings added dimension to fantasy series 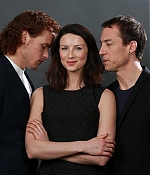 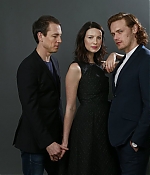 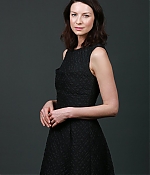 LOS ANGELES TIMES – The first season of the Starz historical romance epic “Outlander,” based on the novels by Diana Gabaldon, saw heroine Claire Randall (Caitriona Balfe) travel back 200 years to the 1740s where she soon fell in love with the equally heroic Scot Jamie Fraser (Sam Heughan). She also found a nemesis in the odious Black Jack Randall, a captain in the occupying British army and the ancestor of Claire’s 1940s husband, Frank (both played by Tobias Menzies). That season ended with Jack brutalizing Jamie before Claire saved him from capture; the couple then escaped to France. This season finds the lovers infiltrating the French court, plotting to save their Scottish way of life.

Gathered in a Hollywood hotel penthouse for a photo shoot and an interview with The Envelope, the three actors briefly pose as Charlie’s Angels. They each have legions of fans: Caitriots, Heughanots and Menziatics. When asked whose group is the fiercest, Balfe and Menzies simply point at Heughan.

Men, how does it feel to be objectified?

Menzies: It’s a curiosity of the show that that role is reversed.

Balfe [pointing to her body]: Nobody’s interested in this. They’re like, “Put your clothes back on, love. But you!” [Pointing to the men]

Menzies: But it’s Jamie more than Jack or Frank.

Balfe: There’s Team Frank. There’s also team Jack, which is — let’s not talk about those ladies.

Heughan: I don’t really pay any attention to it. Are we objectified?

Balfe: I sometimes get indignant on your behalf. The way that the women speak about Sam sometimes, if a guy was ever saying those things about an actress, there would be an uproar. I always want his acting prowess and his talent to be front and center.