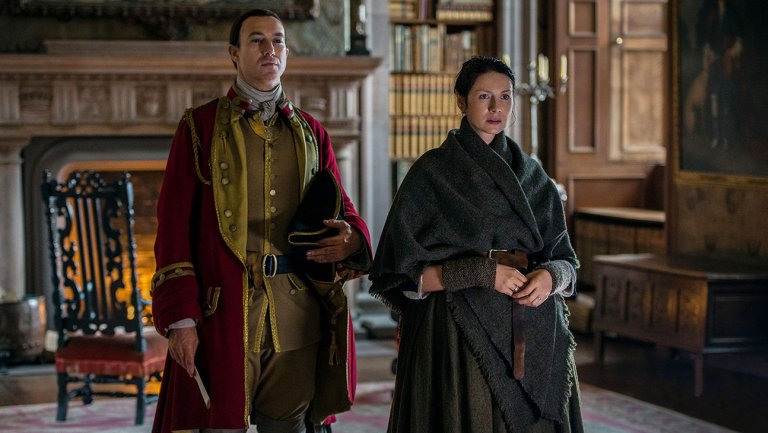 THE HOLLYWOOD REPORTER – [Warning: This story contains spoilers from Saturday’s Outlander, “Vengeance Is Mine.”]

It may have taken longer than everyone had hoped for, but Jamie (Sam Heughan), Claire (Caitriona Balfe), Murtagh (Duncan Lacroix) and Mary (Rosie Day) finally got revenge on the evil and slippery Duke of Sandringham (Simon Callow) on Outlander. And it came in the form of a blunt ax to the head.

After years of scheming and making Claire and Jamie’s lives a living hell, the Duke met his demise in a gory, violent scene closing out a tense roller coaster ride of an hour. After the Jacobite army decided against invading London and turned back to march for Scotland, Jamie’s men got caught inside a church by the British army. Claire used herself as a fake hostage once more to insure Jamie’s and his men’s safety, and the British, believing her to be a Scottish hostage, brought her to the Duke of Sandringham’s home, ironically for her own safety. Once there, the Duke tried to get Claire to lure Jamie to his home to rescue them both from the British, but it was a trap. The Duke once again betrayed them, and tried to get them arrested.

While Jamie and Murtagh successfully infiltrated the Duke’s heavily guarded home, Claire found Mary inside the house since she’s the Duke’s goddaughter. The two women tried to escape through the kitchen but were caught by the Duke and his men. Claire then recognized the Duke’s right-hand man, Danton (Andrea Dolente), as the man who attacked them and raped Mary in Paris, and the Duke confessed that it was because he owed the Comte St. Germain (Stanley Weber) money and he had negotiated for rape instead of murder as payment. Mary, enraged to learn the truth, stabbed and killed Danton herself, while Murtagh decapitated the Duke and laid his bloody head at Claire’s feet, finally fulfilling his promise to her.

“It was time to put an end to this,” showrunner Ron Moore tells The Hollywood Reporter with a laugh. “Enough with this guy who keeps everybody dancing, where you never can tell which way he’s going to go. Eventually, you’re going to run into Murtagh and he’s going to cut your head off.”

Balfe loved how intense and powerful that finale scene was in the kitchen.

“It was really fantastic filming that,” Balfe says. “I honestly loved working with Simon Callow. He’s such a great person to have around set. But what I loved in particular, I loved how Mary got her justice, finally. And it was by her own hand. That was a wonderful part of that scene. She truly deserved to get that peace of mind.”

Balfe couldn’t believe how real the prosthetic head was that the prop department created. “The effects were just so authentic,” she says with a laugh. “And to see Duncan really go at it was hilarious.”

Read more at the source
« Outlander: 2×12 “The Hail Mary” Promo | ‘Outlander’ Stars Found Themselves In An Unsettling New World In Season 2 »