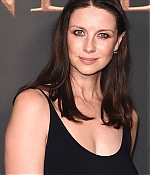 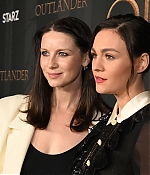 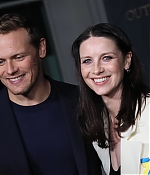 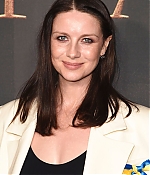 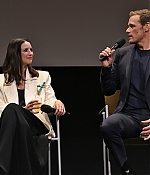 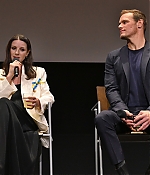 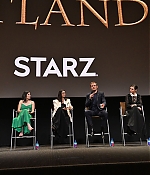 By admin, on March 10th, 2022, under Events, Gallery, Outlander // Comments Off on Caitriona Attends the ‘Outlander’ Season 6 FYC Premiere & Panel 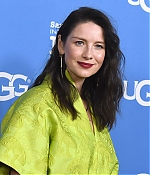 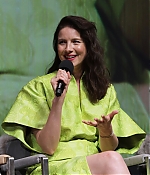 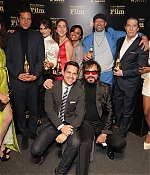 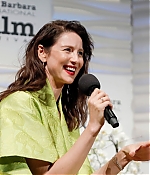 By admin, on March 6th, 2022, under Awards, Events, Gallery // Comments Off on Caitriona Attends the Virtuoso Awards at the Santa Barbara Film Festival 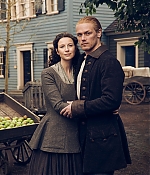 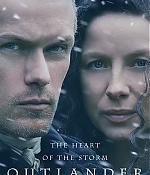 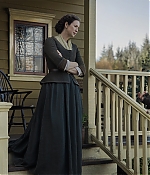 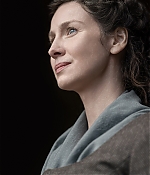 By admin, on March 6th, 2022, under Gallery, Outlander // Comments Off on Outlander Season 6 Promos, Posters & Stills 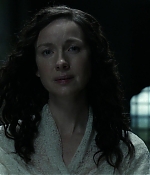 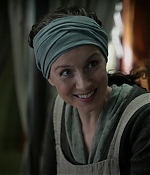 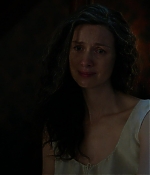 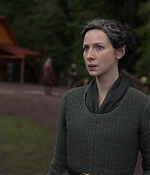 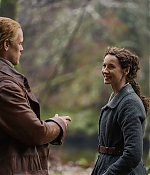 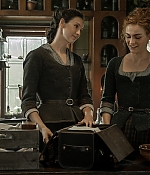 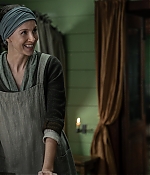 Outlander: Claire Will Unravel in Dark and Intense Season 6

When we last left Outlander at the end of Season 5, the men of Fraser’s Ridge had freed Claire from her abductors and rapists and Marsali had poisoned one of the men behind the attack, while Bree and Roger failed to travel back to the late 1960’s. Season 6 picks up the thread of increased political and social tensions in the colony of North Carolina as the story is now very close to the start of the American Revolution. Jamie has to appear loyal to the Crown because he was granted Fraiser’s Ridge but he knows from Claire, Brianna and Roger that the colonists will eventually rebel and win.

As the men of Frasiers’ Ridge become entangled with political and social conflicts or try to avoid them over the course of the season, it’s more important than ever that the women of the Ridge stick together. “You don’t always see it on screen, women supporting one another out without it being about men,” Lauren Lyle says. “And they really do come together as a family.” The same is true from Claire’s point of view. “Her [Claire’s] relationship with Marsali grows deeper and deeper by the day, which is lovely,” Caitriona Balfe says.

Interpersonal conflict is inevitable in a family unit, but it is clear Outlander is intentionally avoiding the “mother-in law from hell” or related tropes in translating the novel series to the screen. “Caitriona Balfe, Sophie Skelton, and myself have all come together before it to talk about making sure that the women all do support each other and it doesn’t become women hating one another, and sisters hating each other, and any sort of rivalry being the daughters of Claire,” Lyle says. “We spoke to the writers about that, and fought for that to be the case.”

Season 5 was a rough one for many of the characters after the attack on Frasier’s Ridge. Season 6 has not forgotten that Claire and Marsali are living with the trauma. “We see Claire unravel in a way that we’ve never seen her before,” Balfe says. “Claire is such a resilient character and it’s not easy for her to ask for help. I think that that’s one of things that probably is why she’s struggling so much, because really when you’re experiencing the darkest of times, you should be sharing. Her inability to sort of share in that way was hard for her as she’s usually the ear for people.”
END_OF_DOCUMENT_TOKEN_TO_BE_REPLACED

By admin, on March 5th, 2022, under Interviews, Outlander, Press // Comments Off on Outlander: Claire Will Unravel in Dark and Intense Season 6

‘Outlander’ Season 6: We ‘Wanted to Pay Respect to People Who Are Going Through These Traumas’

Droughtlander — the upsettingly long time between seasons of Outlander — is almost at an end. The historical fantasy returns to Starz for its sixth season on March 6. Based on the season’s opening episode, which had its world premiere February 24 in London, this new installment will be well worth the wait.

The first episode of the season, titled “Echoes,” raises the stakes for all of “Outlander’s” characters and reckons with Season 5’s brutal finale. Claire (Caitríona Balfe) and Jamie (Sam Heughan) have built a life for themselves in Fraser’s Ridge, North Carolina, but Claire is still processing the trauma of her sexual assault. Meanwhile, the Revolutionary War is on the horizon, and Brianna (Sophie Skelton) and Roger (Richard Rankin) wonder how they’ll weather the coming conflict.

The most immediate disturbance to Claire and Jamie’s life — and the focal point of the episode — is the arrival of the Christie family to Fraser’s Ridge. Fans of Diana Gabaldon’s novels will immediately recognize Tom Christie (Mark Lewis Jones) and his children Malva (Jessica Reynolds) and Allan (Alexander Vlahos) as trouble for the Frasers. Tom is a ghost from Jamie’s past, having been imprisoned with him in Ardsmuir.

After the premiere screening of “Echoes,” the “Outlander” cast and creative team answered questions and teased an emotional and tumultuous season. Much of the tumult comes courtesy of the Christies, with showrunner Matthew B. Roberts labeling them “the new villains in town.”

“Outlander” Season 6 wastes no time delving into the history (and the animosity) between Jamie and Tom, opening with a flashback to their time in Ardsmuir. “There’s something unsaid between Tom and Jamie, but it’s this war, this power play. They’re constantly battling each other,” said Heughan.

Gabaldon was particularly enthused about seeing the portrayal of these characters, who we first meet in “The Fiery Cross,” the fifth book in her series. “The first time I saw Mark Lewis’s first scene as Tom Christie, I immediately went on Twitter to see if he was there, and I sent him a direct message. I said, ‘Boy you got that man cold.’”

Another major point of discussion in the post-screening chat was Claire’s storyline, and how she is dealing with the aftermath of her sexual assault. “Outlander” has often used (and been criticized for using) sexual violence as a plot device, and it was important to the team that they treat it with the necessary gravity. “What happened to Claire last season was so traumatic, and we didn’t want to ignore that,” said executive producer Maril Davis. “We wanted to pay respect to people who are going through these traumas and say, ‘you’re not alone.’”

“When we first see Claire this season, she’s really on the surface trying to put forward this very brave face,” said Balfe. “For Claire, she’s always been this rock for other people, and I think she’s somebody who finds it very difficult to ask for help. We see her and she’s really trying to tell everyone that she’s okay, but we can see that that’s not the case. She’s unraveling and she’s not really willing to admit that to herself.”

The first episode features a scene where Claire’s daughter Brianna — who was sexually assaulted in Season 4 — offers her help. “There has always been this beautiful injection of the mother-daughter role reversal,” Skelton said of the scene.

“What I think the show does really well is to show that the dynamics of mother and daughter aren’t always black and white, and also to show that if we’re going to show trauma, to show that people deal with the aftermath and PTSD in different ways,” Skelton continued.

“You’re holding everything very close to the surface and you’re trying to keep a lid on top of everything,” said Balfe. “But as we see the season progress, that’ll get harder and harder, and we see that Claire starts to lean on some things that she’s been using medically to give herself a little bit of reprieve from the pain that she’s experiencing.”

While Claire’s trauma and the arrival of the Christies are the two main plotlines of “Echoes,” the episode also introduces several new stories that will come into play throughout Season 6.

A major development is that the governor of North Carolina asks Jamie to work with their Cherokee neighbors. Jamie is conflicted about the offer, which later plays into his relationship with the Christies.

“He’s just being pulled in every direction,” said Heughan of Jamie’s Season 6 arc. “He’s always trying to find the right line between what to do with history. We’ve tried to change history in the past. Now we just want to be on the right side.”

At eight episodes long, this is “Outlander’s” shortest season yet. However, based on the jam-packed “Echoes” and the actors and creative team’s thoughts, it’s clear that “Outlander” fans are in for an intense trip back to Fraser’s Ridge.

“This season is such a roller coaster ride,” said Davis. “We truncated this season and in some ways I think it worked out better, because you just never get a break. It just starts going and never stops.”

By admin, on March 5th, 2022, under Interviews, Outlander, Press // Comments Off on ‘Outlander’ Season 6: We ‘Wanted to Pay Respect to People Who Are Going Through These Traumas’
﻿