We have more pictures for you, Outlander nation!

In preparation for Outlander‘s much-anticipated presence at San Diego Comic-Con next Friday, we have obtained some exclusive first looks from season 3.

And look who it is! Lord John Grey and Jamie Fraser (Sam Heughan)!

We also have a photo of Claire (Caitriona Balfe) and her 20th-century hubby, Frank (Tobias Menzies), gazing lovingly at a young Brianna. 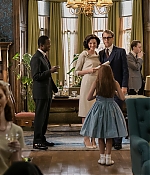 So let’s recap: Expect a tale of two centuries when Outlander makes its much-anticipated, gawd-it’s-been-forever return to Starz in September. While Jamie (develops an unexpected rapport with his British captor John Grey (David Berry) after the Battle of Culloden in 1746, Claire has returned to 20th-century Boston to resume her marriage to Frank and raise young Brianna, her feisty daughter fathered by Jamie.

But now for the bad news: It’s going to be several episodes before we see the time-traveling nurse reunite with her hunky Highlander. When the lovebirds finally do hook up in a Scottish print shop — a scene fans of Diana Gabaldon’s best-selling novels have been breathlessly awaiting — come prepared with a cold compress.

“For Sam and I and all the writers, we felt that it was so important to make sure we had the tone right,” Balfe tells EW. “Claire’s had time to prepare herself for what this might be and to play various scenarios through her mind. But for Jamie, this person just landed in his life again and there was no warning. So you’ve got two people trying to figure out how to go about this.”