“A. Malcolm, Printer and Bookseller.” Has there ever been a sweeter sight, Sassenachs, than the sign hanging outside an Edinburgh print shop in Outlander‘s just-released Season 3 trailer? Och, we think no. Let’s all gaze upon it for a wee second, shall we?

If you’re someone who hasn’t read Diana Gabaldon’s novels and you don’t know why this is a big deal, no worries! Skip down to where we tell you it’s safe, because there are big spoilers ahead.

Spoiler alert! If you have read the books, you know that the Carfax Close shop is the site of Jamie (Sam Heughan) and Claire’s (Caitriona Balfe) reunion after a 20-year (by way of 200 years) absence. And while we don’t see Mr. Malcolm himself in the footage, everything else in the lead-up is there. Claire’s expectant/worried face! The sign! The bell! You can all but smell the ink and the alepot inside. Such sweet torment, no? (And if you missed the scene in the trailer, make sure to go back and watch the video all the way to the end. They’re sneaky, those Starz folks.)
OK IT’S SAFE NOW, non-book-readers. The trailer also features several other scenes based on events in Gabaldon’s Voyager. As previously announced, the drama will examine how Jamie and Claire’s lives changed drastically during the years between her return to her own time and the events of the Season 2 finale. So that means we see lots of Frank in times both happy (cuddling a baby Brianna) and strained (that shot of Claire fuming while he slinks upstairs looked rough), as well as footage of Jamie being arrested upon his return to Lallbroch and his subsequent adventures with Lord John Grey, played by new cast member David Berry.

We also witness Brianna and Roger helping Claire in her search (as well as smooching a bit), as well as Jamie making significant eye contact with a woman who is not his mo nighean donn. Two decades is a long time, people! 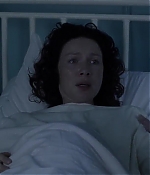 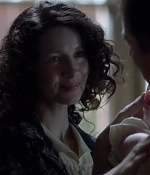 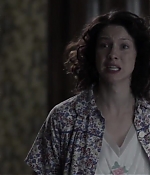 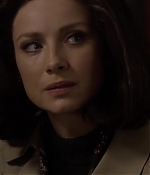